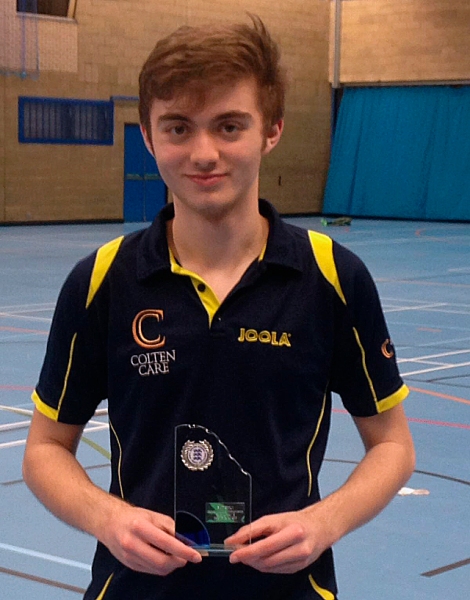 Podium position at the ESTTA Under 16 National Championships

“ Continued sponsorship … a major reason for my rapid improvement, helping me to train more often and take part in more tournaments”

Many grateful thanks are due to Colten Care (Lymington) and SD Sport (sdsport.co.uk) for their kind renewal of Matthew’s sponsorship in the 2016/2017 season, enabling him to greatly increase the number of training hours each week. As a result, Matthew has significantly improved and his English table tennis ranking has risen. Success in many tournaments such as winning the Milton Keynes 2* three times and beating the England Juniors number 10, winning the Horsham 2*, and doing well in the National Junior County Championships ( Premier Division ) beating the England Juniors number 9 and the Bath Grand Prix where Matthew beat the England Juniors number 15 are the main contributors to his ranking lists successes.  Matthew (just 16) started the season ranked 32nd in the U18 category ( Juniors ) and has already jumped up 25 places to 7th, making him the highest ranked U18 in both Hampshire and both the Southern and South-West Regions of England. The current season is only halfway through and Matthew’s aim for the U18 ranking list is to reach the top 10 before the end of the season. In the U21 category, Matthew started the 2016/2017 season at 69th; he is now currently ranked 61st. In the senior men’s category, starting the season at 261st, Matthew is now ranked as 183rd (all rankings as of March 2017 ).

Matthew, having reached the Semi-finals of the ESTTA Under 16 National Individual Championships, was selected to play for England in the Senior Schools international against: Scotland, Ireland, Wales, Guernsey, Isle of Man, and Jersey. He won 13/15 singles matches and bronze medal in the team event on his International debut.

Matthew has now been to Germany several times to play league matches and to train with his club, Mainz 05. Playing for the third team, Matthew has so far managed to win 6/6 of his singles matches. He also was asked to play up to the second team, against Nassau in the Oberliga – second in the league table at the time- where he played alongside several international players. He looks forward to playing more league matches and training with Mainz 05 in the near future. He also looks forward to playing more tournaments abroad and to gaining more German ranking points.